By many accounts, 2017 was a banner year for patent sales. In addition to the number of sales building on a strong trend over the past three years, patent portfolio offerings have increased year over year from 841 portfolios in 2014 to 1,415 portfolios in 2017; and likewise the number of deals transacted have increased each year from 734 in 2014, to 843 in 2015, to 966 in 2016. While we don’t have final 2017 numbers yet, we were ahead of pace with 979 deals for transactions recorded by the end of the year. We also saw an increase in offerings of larger patent portfolios in 2017. Clearly, many companies are choosing to clean house, perhaps in an effort to get better control of budgets. Others that might otherwise retain assets and try to license or litigate appear to be selling.

There are several prevailing theories as to what might be driving this trend, but the biggest factor is likely the legal uncertainty created by the controversial Supreme Court decision Alice Corp. v. CLS Bank Int’l,[1] which continues to resonate across the marketplace. The impact of Alice v. CLS cannot be overstated. While the Supreme Court was striving to create more clarity regarding patent validity, the reality is that the decision has sowed a good deal of confusion as to whether a company’s patents are valid or not. Further, proceedings to invalidate patents via the Patent Trial and Appeal Board or an appeal board or inter partes review proceeding at the U.S. Patent and Trademark Office make it relatively easy to challenge a patent. As a result of this uncertainty and the relative ease with which patents can be challenged, companies are choosing to sell their portfolios.

From a pure supply and demand perspective, the increase in sales has put patent prices under pressure as the market grapples with an oversupply. The question for 2018 then becomes: Does this trend continue and the market stay oversaturated? Or do we begin to see some sort of market correction where fewer patents are for sale but there is an overall increase in patent quality?

While patent sales may continue apace with a corresponding decline in prices, this trend cannot continue forever. Eventually, and this may happen sooner than later, Congress may take up the Alice v. CLS decision and provide some legislative clarity, as many bar associations and companies in various industries are requesting Congress to make similar changes to subject matter eligibility laws during 2017, and are continuing their efforts in 2018.

More Patents on the Cheap

At the same time, many companies have been trying to drive down patent filing costs each year. Surveys have identified that operating companies pay between $5,000 and $10,000 per application depending on technology, with an average fixed fee of approximately $7,000 to $7,500 as identified by the last initial public offering survey in 2011. Anecdotally, I hear from many companies that the fixed fees have only decreased since 2011. To put this in perspective, when I drafted patent applications in the early- to mid-1990s the average cost was around $10,000 to $12,000 for technology inventions.

The Case for Patent Quality

There are many reasons for a company to increase its patent filings, mostly for marketing and public relations purposes and not for any real patent protection or monetization effort. For example, companies often feel that they need to increase their patent filings just to keep up with the Joneses, as many outside organizations use the number of patent filings a company makes or holds as a barometer for how innovative a company is. This sometimes attracts investors or raises the stock price of a company, but it doesn’t indicate whether the company has the right number of quality patents.

But what has occurred in this arms race is that the patent offices around the world become overburdened examining incrementally different (or not so different) patents, which reduces the quality control the patent offices can do, and results in weaker patents being issued that probably shouldn’t have been issued or even filed. When patent prosecutors are taxed with having to file more and more applications in shorter amounts of time, the number of applications that are being drafted to be litigation worthy and provide real protection, which a company needs, decreases dramatically.

I believe that companies should be spending more money on filing clearly articulated and higher quality patents. What I mean by “higher quality patents” is patents that will survive legal challenges to their validity. Companies are filing too often and misallocating their resources by spending money the wrong way as people pay less and less for preparing and prosecuting patent applications. While only 1 percent of patents ends up in litigation, this suggests that much of the remaining 99 percent aren’t worth fighting for. In other words, companies are wasting money and time by spreading the peanut butter across a lot of patent filings, rather than consolidating it into fewer more substantial sandwiches.

One of the reasons for this deterioration in quality is the ease with which a new patent can be filed. The amount of money paid to an attorney to file a patent application today has gone down significantly and is less now than when I was prosecuting patent applications 20 plus years ago. With attorneys’ billing rates increasing over the years, companies are turning to attorneys who can draft patent applications in less time or are outsourcing them to lower cost geographies.

This also suggests that patents are being treated like a commodity and that the quality of the patents being filed may be deteriorating. I posit that in patent prosecution, patent applications are not a commodity and you actually get what you pay for, so you should make sure it is good. 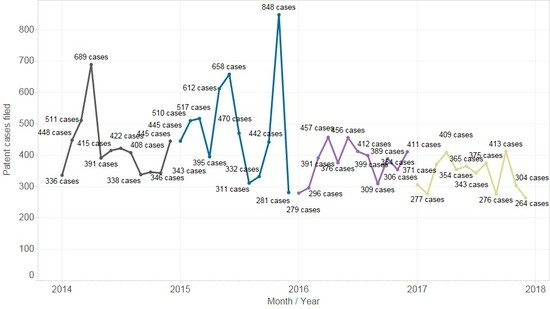 The net effect of this focus on quantity versus quality is the patent marketplace suffers. As Manny Schecter, chief patent counsel at IBM, has previously argued, if we raise patent quality, not only will others be deterred from challenging these patents, but many of the patents that are asserted in frivolous suits today would not have been issued in the first place. Or, if they were issued, they would be issued on a narrower basis that poses less of a threat.

Prescription for a More Efficient and Effective Patent Ecosystem

I submit that most companies would benefit from filing fewer patents and spending the money saved on making sure those patents are drafted with more clarity and specificity. This helps companies and the overall patent ecosystem in several ways by:

1. Reducing the budget for maintaining a company’s patent portfolio, providing excess capital that could be used elsewhere;
2. Increasing the number of higher quality patents that can withstand challenges and be easier to assert;
3. Ensuring that the resulting patents will be more valuable and easier to license and transact; and
4. Reducing litigation costs given the lower number and higher quality of filings. As a result, an accused infringer will be able to more easily determine if it is at risk of infringement, which will drive more licenses.

Taken together, all of these factors will improve the overall health of the patent system by creating a more stable group of valuable issued patents.

So how many patents are the right number to protect a company’s intellectual property?

There is no absolute number, but too often companies are filing for incremental changes that don’t provide any new protection for the company, don’t provide a new avenue to assert or monetize the patents, and don’t improve the chances of withstanding a validity challenge, but are only filed to achieve a benchmark or objective. I propose that those patent applications are the ones to forgo in exchange for spending more time and energy on the truly innovative ideas and making sure those are prosecuted properly to address a company’s protection or monetization needs.

In conclusion, as a passionate advocate for the benefits of a proactive risk mitigation approach to intellectual property, a patent marketplace that encourages a higher quality of patents means less frivolous litigation, better resource allocation, and an environment where companies will be in a stronger position to achieve their business goals and increase value over the long-term. In other words, a focus on higher patent quality should lead to a more efficient and better functioning marketplace and a more well-respected patent system, important objectives to ensure continued innovation for us all.

Russell W. Binns Jr. is the chief executive officer of Allied Security Trust, a not-for-profit that identifies, analyzes and purchases patents for sale on the market on behalf of its member companies. Prior to his position at AST, Binns worked as chief intellectual property counsel for Avaya Inc.

The opinions expressed are those of the author(s) and do not necessarily reflect the views of the firm, its clients, or Portfolio Media Inc., or any of its or their respective affiliates. This article is for general information purposes and is not intended to be and should not be taken as legal advice.

A link to the original article may be found here.